Literature / The Things They Carried 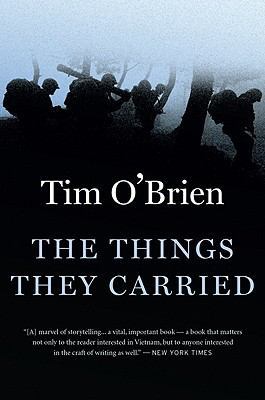 "War is hell, but that's not the half of it, because war is also mystery and terror and adventure and courage and discovery and holiness and pity and despair and longing and love. War is nasty; war is fun. War is thrilling; war is drudgery. War makes you a man; war makes you dead. The truths are contradictory."
— Tim O' Brien, How to Tell a True War Story
"A thing may happen and be a total lie; another thing may not happen and be truer than the truth."
— the same
Advertisement:

A bunch of related short stories written by Tim O'Brien that, for the most part, revolve around the experiences of his fictional narrator and the 17 (at first) other men that make up his platoon in The Vietnam War. It includes the short story of the same name.

By the way, that fictional narrator happens to be named Tim O'Brien. He has a whole bunch of other things in common with the book's author as well, though certainly not everything—unlike the narrator, the real Tim O' Brien does not have children (at the time of writing) and cannot say with certainty that he ever killed a man. In fact, everything in this book should be taken with a grain of salt with regard to its "truthfulness"; many stories seemingly presented as factual are altered or made up, as the author tries to make an emotional atmosphere that is "truer than true."The book has a disclaimer that it's a work of fiction even on the title page: "The Things They Carried / A work of Fiction by Tim O'Brien."

The book also makes comments about the act of writing itself, and, in particular, devotes an entire chapter (source of page quote) to talking about what makes a true war story.

Required high school reading in some places. "Sweetheart of the Song Tra Bong" was made into a movie, "A Soldiers Sweetheart" starring Skeet Ulrich, Georgina Cates, and Kiefer Sutherland.