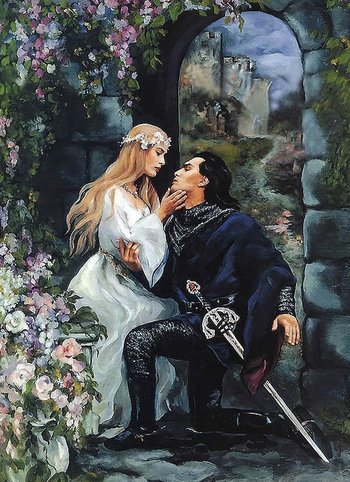 A girl worth fighting for.
Advertisement:

Heroes on quests are common. Sometimes, The Hero's motivation for pursuing the quest derives from his regard for some sort of idealized woman. Not uncommonly, this lady is the hero's love interest, and he is striving in order to be able to marry her. His love for her is pure and strong and overcomes all temptations that are thrown into his path.

The lady herself often occupies an exalted role: she is a goddess, a saint, a queen, a princess, or something similar. Generally, she is very pure, sometimes to the point of seeming unapproachable. If she is unmarried, she is chaste. She is also often a Proper Lady. If it's not just the fact that she's inspirational, but that he feels like she's above him, she's a Peerless Love Interest.

The lady can be the one who gives the hero his quest; he then departs to complete it before returning to her. Alternatively, she flits in and out of the hero's path, reminding him of her presence but staying out of reach. Occasionally, she is at his side all along, serving as a reminder of what he is striving for and inspiring him to persevere. In all situations, she often dispenses advice to the hero, although that advice can be rather cryptic.

This trope is particularly common in works from the medieval and Renaissance period, as it ties closely to the ideas of the Courtly Love tradition. In older works, it often takes the form of a knight errant and his lady love.

Compare to The Mentor, The Lost Lenore, Manic Pixie Dream Girl, and Men Act, Women Are. Called "Meeting With The Goddess" in Joseph Campbell's The Hero With A Thousand Faces. When the hero's muse is another hero, it's The Knights Who Say "Squee!".

The Hero's Idol is related, but has different connotations.