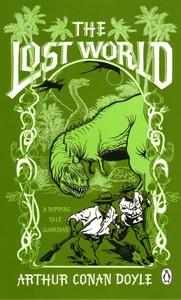 For the Jurassic Park novel, see The Lost World (1995).
Advertisement:

Sir Arthur Conan Doyle moved from detective stories to more fanciful fare with this 1912 novel of adventure and discovery.

Pugnacious Professor Challenger claims that he's found a place in the Amazon cut off from the rest of the world and housing all kinds of species previously believed to be extinct. He sets off on an expedition to prove his find, accompanied by a skeptical colleague, Professor Summerlee; the cool-headed sportsman Lord John Roxton; and the narrator, young reporter Edward Malone. They soon find Professor Challenger's lost world, an isolated plateau inhabited by dinosaurs, primitive humans, and savage ape-men, but when the bridge back to the outer world collapses, their journey of discovery becomes a fight for survival.

Inspired a bunch of films and TV series, including the series Sir Arthur Conan Doyle's The Lost World, The Lost World (2001), and a 1925 film adaptation that featured groundbreaking stop-motion animation and was a Trope Maker for movies about dinosaurs.

Followed by two sequels: The Poison Belt and The Land of Mist.