Brigandine is a Strategy RPG series with a twist: instead of controlling a few groups of characters, you control one of six playable nations. 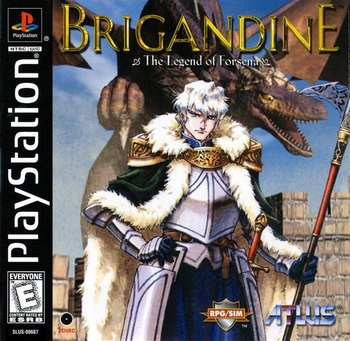 Brigandine: The Legend of Forsena's story revolves around the mystical land of Forsena and its six countries' attempts to unite/conquer it: 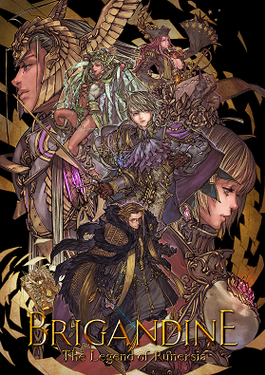 The game features a multi-faceted war between six nations, five of which bear powerful relics called Brigandines, for complete control of the continent of Runersia. The conflict was instigated in the year 781 by a series of coinciding events: the Norzaleo Kingdom's monarch dying under unexplained circumstances, civil unrest in the Holy Gustava Empire precipitating an invasion of Norzaleo, the disappearance of the Republic of Guimoule's president, a revolt within the Mana Saleesia Theocracy, the formation of the Shinobi Tribe, and the United Islands of Mirelva seizing the opportunity provided by the chaos to plunder the mainland.

The six nations of Runersia are:

Brigandine was released in the U.S. and has since gained cult status (a game from '98 costing $40 now is remarkable). As a result of its low U.S. sales, the expansion pack filled with goodies, called "Brigandine: Grand Edition," was never brought to the U.S. The Grand Edition of the game, however, did well enough in Japan that it's available as one of the PS1 Classics/Archive in the Japanese PSN, so you can always give this game a shot if you understand/don't mind Japanese. And if you're well-versed in patching and emulation... well there is an English patch, with some fan dub

, though as of current, it will remove any voice acting outside movies, but the patchers are working on it.

After years of absence, a Non-Linear Sequel was announced for Nintendo Switch, titled Brigandine: Legend of Runersia. As the name suggests, it takes place in a brand new continent. It was released on June 25, 2020 worldwide. A PS4 port was released on December 10th, 2020.

For other JRPG strategy games with a similar country-conquest objective, See DragonForce and Dark Wizard.

This game is not to be confused with the piece of armor worn by knights in real life or the Mecha Expansion Pack from Thunder Force V that both share the same name.