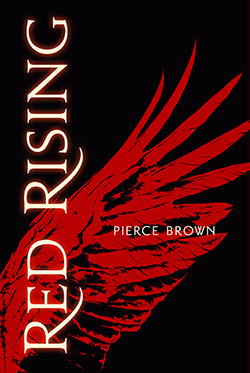 Live for more
"You brave Red pioneers of Mars—strongest of the human breed—sacrifice for progress, sacrifice to pave the way for the future. Your lives, your blood, are a down payment for the immortality of the human race as we move beyond Earth and Moon. You go where we could not. You suffer so that others do not.
“I salute you. I love you. The helium-3 that you mine is the lifeblood of the terraforming process. Soon the red planet will have breathable air, livable soil. And soon, when Mars is habitable, when you brave pioneers have made ready the red planet for us softer Colors, we will join you and you will be held in highest esteem beneath the sky your toil created. Your sweat and blood fuels the terraforming!"
—Octavia au Lune, Red Rising
Advertisement:

Red Rising by Pierce Brown is the first installment of a trilogy revolving around a society in the distant future in which humanity is divided into a color-coded caste system. Darrow is a Red, a 16 year old Helldiver laboring under the surface of Mars to make the world habitable for future generations.

Then the day comes where he discovers that it is all a lie. Mars has been habitable for centuries, and the surface is inhabited by all colors in a brutal hierarchy built on the backs of the Reds. Darrow is given the opportunity to change things, altering his body to become a Gold. His goal: to infiltrate their Institute and carve himself a high place in the Society, putting himself in the best position possible to tear it all down.

The series continues with Golden Son, the second installment, in which war is started to thwart the Big Bad's plans.

The third installment, Morning Star, was released in February, 2016, and follows Darrow as he continues the struggle from the previous books.

A handy chart of all the castes can be found on the book's website here.

The series has spawned a Prequel comic titled Sons of Ares which began in 2017. The first volume of a follow-up trilogy entitled Iron Gold appeared in January 2018.

WARNING: Several of the following entries are spoilers for the entire series, not just the first book!

"The Institute is not a school, it is a culling ground where the Golds go to hack at one an­other till the strongest in mind and body is found. You. Will. Die."
— Mickey, Red Rising