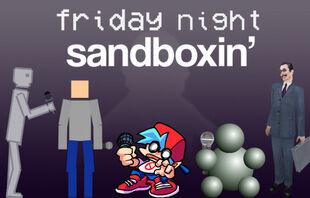 Expand Dong.
— Bonzi Buddy
Friday Night Sandboxin' is a Friday Night Funkin' mod made by Bonker34, Naireshi, and sirj455. It adds a new week with 5 songs, each one featuring different characters from famous old sandbox games… and BonziBuddy.
Advertisement:

Finally being given a break from his perpetual rap battling, Boyfriend decides to get on his computer and play some old sandbox games. Not even this simple activity will let him rest his vocal cords, however; the characters in these games are now stepping up to challenge Boyfriend, and that might not even be all the computer has in store for him.

The mod can be downloaded on GameBanana here.