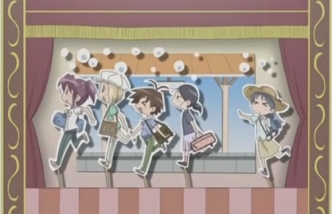 Picture Dramas are a variation of animated shows, with the difference that there is not much animation to behold. They generally consist of a series of still drawings, with voice actors performing the various roles, often having the "camera" move over the picture from character to character. In this, they could be seen as a form between anime and drama CDs. The emphasis is generally on the voice performances, with the pictures functioning as visual aids.

Sometimes picture dramas still contain a slight amount of animation, mostly by supposedly moving the on-screen characters around like puppets. They also tend to be produced in a different style, with Super-Deformed characters being the norm.

Nowadays most popular anime are accompanied by a picture dramas and often find their way as omake on DVD-releases. They are clearly cheaper to make, but still offer the involved artists, writers and and voice actors an outlet for showcasing their talents—and of course generating extra revenue. Whether the stories told are part of the official canon differs from show to show, very much in line with the status of most audio adaptations.