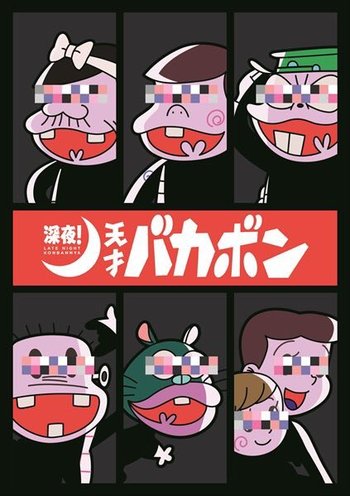 Bonsoir! It's been a while since Fujio Akatsuka's famous family has been on the air. So how have they changed during the gap? Well, unlike Akatsuka's other famous family... not by much. The schemes are as zany as ever, the gags are more rapid-fire, and the fourth wall is a little more broken than usual— It's just that they're on late night television now, which means they need to change up their age limit on jokes.

But that comes with its own slew of problems— a late night show means their adventures are going to actually be late night after all, and Bakabon's folks just don't want to stay up into the wee hours. Their usual gags probably aren't going to fly with broadcast standards, and there's way too many things that hinge on controversy and copyright infringement; but nothing, from invokedmeddling executives to cheap production values, is going to stop something from airing in their slot.