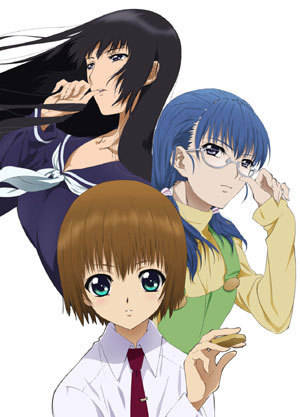 Shion's King: The Flowers of Hard Blood is a seinen manga (with an anime adaptation) by Katori Masaru that blends the game of shogi with a murder mystery.
Advertisement:

Shion no Ou is the story of a young girl named Shion Yasuoka. When she was a very young child, she witnessed the brutal murder of her parents. Oddly, the murderer leaves her alive but takes the "king" piece from the shogi board (the Japanese rendition of chess). The resulting trauma leaves her unable to speak, forcing her to communicate with people by writing her thoughts out on a notebook (... no, not THAT notebook).

After her parents' murder, Shion is later adopted by her next-door neighbor and family friend, Shinji Yasuoka, who is a kishi, or professional shogi player. Shion continues to play shogi, learning from Yasuoka out of both her own love of the game and her desire to discover the identity of the murderer.

An anime adaptation, produced by Studio DEEN, was released in late 2007 and finished up in March of 2008, following the current storyline of the manga fairly faithfully. The manga ended a few months afterwards.

Compare with Hikaru no Go, which has a similar premise, only with Go instead of shogi.

Satoru: Does that mean you would accept other motivations for killing people?