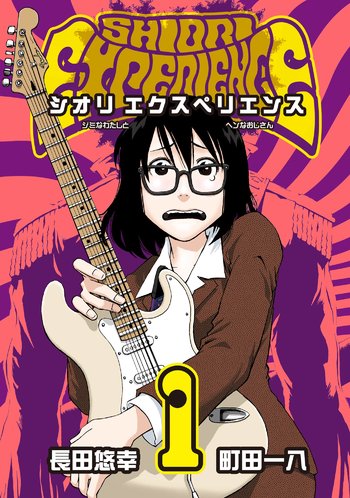 Shiori Honda's life didn't pan out the way she wanted to: She gets little respect from her students at school and her family life in tatters ever since her brother ran off and left them twenty million yen in debt. However, on her 27th birthday, she starts seeing the ghost of Jimi Hendrix, who can take control of her through a plug at the back of her neck, turning her into a virtuoso with the guitar. It turns out she has unwittingly become a Crossover - someone who's given the guidance of a musical legend, with the caveat that if she doesn't become a legend before her next birthday herself, she's going to die. What follows is part coming-of-age story, part supernatural thriller and part gorgeous artwork.

Shiori Experience - Jimi na Watashi to Hen na Ojisan (My Plain Self and an Odd Old Man) by Machida Kazuya and Osada Yu-ko that started serialisation in 2013 and, as of 2020, is still ongoing.