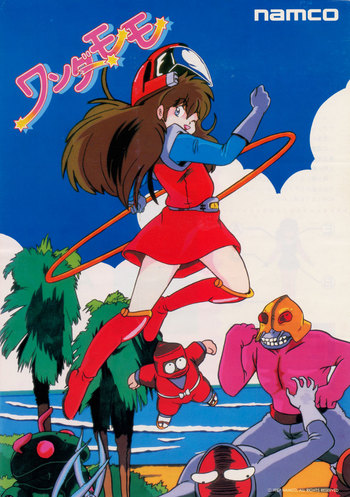 Released by Namco in 1987 as an arcade title, Wonder Momo was a beat-em-up about fighting off baddies as Momo Kanda, a Henshin Hero spoof that fought with kicks when underpowered, and a special "wonder ring" when transformed. The first game was framed as the set of a hero stage show, where "Momo" was really an actress playing out the in-universe character's fictional exploits. With a humorous angle and a bit of fanservice on the stage, Momo's adventures were eventually ported to PC Engine in 1989, as well as the Wii's Virtual Console in 2007. The arcade game was Namco's last 8-bit title.

, the comic is a comedy and action based series with ongoing story arcs. Rather than be an actor, Momo instead is a struggling idol that gains Wonder Momo's powers by accident, meaning this time, she has to fight the monsters off for real. It’s later revealed that this Momo is, in fact, the daughter of the original Momo.

In terms of crossovers, her only other video game appearances were as a playable character in Namco × Capcom and Queen's Blade: Spiral Chaos, followed by several years in limbo. Things weren't all bad for Momo after that— Bandai Namco and ShiftyLook briefly brought back the character in 2014 with an anime series based off of the webcomic continuity, consisting of five 7-minute ONA anime shorts by Graphinica streamed via Nico Nico Douga with a simulcast on Crunchyroll. In addition to this, the sequel game Wonder Momo: Typhoon Booster was developed by WayForward Technologies that same year for Android.

Tropes common across the whole series:

The Original Arcade and PC-Engine Games provide examples of:

The Web Comic provides examples of: