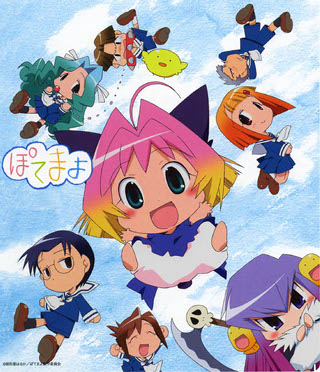 Bow to my cuteness
Premise: I have no idea. It's... it's... I don't know what it is.
—Jason Miao's Thin Slicing review

Potemayo is a 12-Episode Anime, based on a Yonkoma manga, that takes the Widget Series approach to the ISO-standard anime high school love triangle: Girl meets boy, girl falls for boy, boy doesn't notice girl, boy finds titular moe-blob in fridge, boy names moe-blob after foodstuff (a potato-and-mayonnaise croquette), moe-blob loves boy at first sight, boy treats it as pet and adopts it, moe-blob's antics give girl an 'in' with boy, girl has to build on this and contend with jealous moe-blob for boy's affections - boy doesn't notice. Then the first half of the first episode ends.

The second half introduces a B-plot in the form of a second moe-blob, Guchuko. A shy, tsundere moe-blob which cuts its way out of the fridge with a scythe and Beam Spams anything she doesn't like the look of from snakes on the sides of her head. She leaves presents of scorched, bleeding animal carcasses for the girl who feeds her snacks.

The second episode is about how one of those two guys wants to know what Potemayo feels like. He and the protagonist end up in cheerleader outfits as a result of his efforts. The third episode has Potemayo puking over one of the girls in class... getting the idea?

All this is woven into the framework for a gently humorous Slice of Life series. Most of the humour ensues from the interactions between the 'normal' characters and the childlike moe-blobs. The rest, well... let's just say that you can expect to say, "...what the f***?" at least Once an Episode, besides the toilet humour.