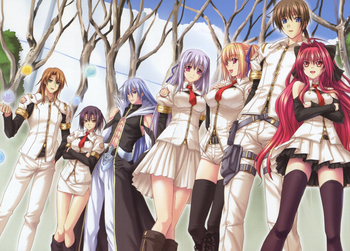 In a world where spirits roam freely, there are people who can tame them and control them with the power of music. They are known as the Dantists, their music as Commandia. The world of Polyphonica focuses on one Dantist and his spirit. Phoron Tatara, lonely, made a contract years ago with a very powerful, if somewhat feisty, spirit, Corticarte Apa Lagranges. Their jobs at the Tsuge Dantist Office are told at a relaxing pace, with their coworkers and people they meet playing a large part.

Originally a Visual Novel, Polyphonica has had two anime adaptations. The first, aired in 2007, shared the name of the novel and became infamous for being Off-Model, with a car chase scene in episode 7 overshadowing the rest of the series entirely.

In 2009, a new anime, Polyphonica Crimson S, based on the Crimson series of Light Novels, aired. This one is set during Phoron's years at the Academy, detailing his journey from when he met Corti for the first time since the night where she liked his singing.

Tropes in the world of Polyphonica include: