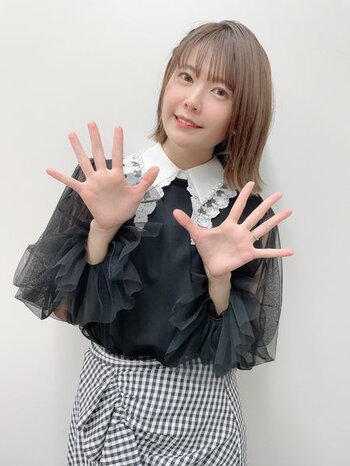 Ayana Taketatsu (born June 23, 1989) is best known for playing Azusa Nakano from K-On!, Ako Suminoe from Kiss X Sis, Kirino Kousaka from Oreimo, and Tsugumi from Guilty Crown. Has a tendency of late to be typecast as girls who are either overly mature/serious for their age (Azusa of K-On!) or violent, selfish and domineering (Kirino of Oreimo and Mio of MM!). Almost all of them are Tsundere, and one way or another are invariably associated with cats. And if she's playing a "little sister" character, it's a sure bet she will be in love with her big brother too!

She apparently is also an avid otaku in real life. She's an admitted fan of Ghost in the Shell, and even plays dating sims for men sometimes, such as Sister Princess. She also is apparently a little sister herself. (Kana Hanazawa has even called her a real-life Kirino.)

She has a voice acting relationship with Kana Hanazawa (in Dog Days, Guilty Crown, Oreimo, The World God Only Knows, and The Quintessential Quintuplets). They're apparently friends in Real Life too.

In May 2013, she formed a duet with Aoi Yūki called Petit Milady.

On June 23, 2019, she announced that she married fellow voice actor, Yūki Kaji.

Wow, there's no way this description can be this cute... so cute that someone needs to make an art of it.