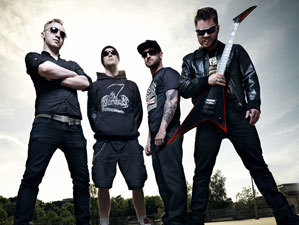 Zombiekrig ("Zombiewar") is a Swedish thrash metal band from Västergötland. Although Sweden is one of the greatest metal nations on earth, Thrash Metal never really stuck there, and the few exceptions to the rule have been fair to middling at best. Zombiekrig who arrived during the brief wave of retrothrash, changed all of that pretty damn quick.

Went on hiatus in 2012 after the release of their second album 'Den vänstra stigens ljus.' Singer Axel Widén pretty much confirmed them breaking up after playing the Scorched Tundra festival in 2013, although they're still listen as "on hold" on metal-archives.com as we speak.

Shut the fuck up, give me all your tropes: