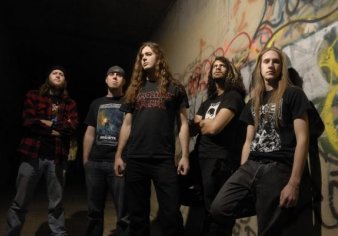 Warbringer are an American Thrash Metal band that formed in 2004. They started under the name Onslaught till 2004 upon learning of another band having the same name. They were signed onto Century Media to represent the LA Thrash revival scene.

Highschoolers John Laux and Victor Mikhaltsevich met each and began to write songs after learning of each other's interest in metal music, with the latter introducing John Kevill as the vocalist of the band. The band finally had a solid line up in place and had adopted the name Warbringer after attempting to combine War- as prefix to a variety of words. They had recorded a four-song 2004 demo that was never released. It was the only recording with Victor Mikhaltsevich with the band. Due to creative differences the band had decided to seek out another guitar player. Emilio Hoschet soon joined the band and in 2005 they had self-financed the Born of the Ruins demo. In 2006 the band had also finished the One By One, the Wicked Fall demo. Self-financed again and recorded at Love Juice Labs. The original pressings were handmade, but the band eventually opted to have them printed more professionally.

They finally got to recording in 2007 for their debut, and went on a six year old tour that's still going as of today. They had opened for big bands like Suffocation, Napalm Death, and Exodus. In 2009, they started with the sophomore effort done within 12 days.

During the spring of 2011 Warbringer enter The Omen Room studios with producer Steve Evetts for the third album. Afterwards, Warbringer began a tour with Diamond Plate, Lazarus A.D., and Landmine Marathon, and in 2012, opened for Iced Earth and Symphony X.

In 2013, they announced a new album due for an October release, entitled IV: Empires Collapse. 2014, unfortunately, brought the departure of Laux and Cruz; after a European tour with Iced Earth that employed Balmore Lemus (ex-Exmortus) and Blake Anderson as fill-ins, Kevill very nearly ended the band but decided to soldier on and hold auditions for new members. As of 2015, the entire new lineup has been announced; Noah Young is taking Laux's spot, while Alex Malmquist and Vicken Hovsepian have taken the bass and drum slots. This didn't last, however, as the new blood left by the end of 2015; on the other hand, Carlos Cruz has returned, while Jessie Sanchez (Bonded by Blood) and Jadran "Conan" Gonzalez will be part of the live lineup for their winter 2016 tour. Sanchez was eventually made full-time, while Chase Becker took the vacant guitar spot. Woe to the Vanquished was released on March 31,2017.