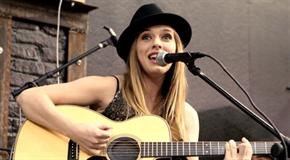 ZZ and her guitar.
Advertisement:

Ward released her second album, The Storm, in 2017.

Ward's music has been featured on a couple hit shows, including Pretty Little Liars and Awkward., as well as promos for Nashville. She's also played most of the major late night talk shows.

The Pennsylvania-born Ward also plays guitar, piano and harmonica. You can listen to her music at her YouTube channel