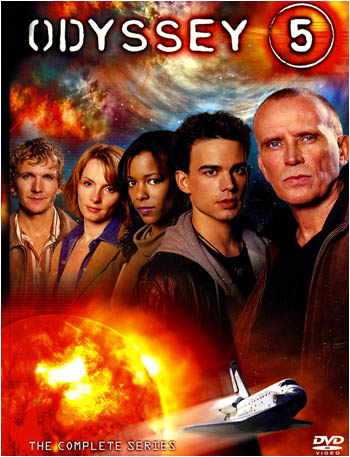 "We saw the Earth destroyed, and in a heartbeat everything and everyone we knew was gone."
"It just occurred to me this is one scenario NASA really forgot to program into the simulators."
— Kurt Mendel, upon witnessing the destruction of Earth in "Pilot"
Advertisement:

A routine mission for the crew of the space shuttle Odyssey turns to nightmare when minutes after launching their payload, they witness the entire planet Earth implode from orbit. As they drift in space they are rescued by an advanced being calling itself "The Seeker", who informs them that Earth is not the first world to suffer such a fate—his own world did, as well as others—but that this is the first time he has ever found survivors. The Seeker offers to send their minds back in time nearly five years, so that they may try and stop it from happening. After going back, the crew of the Odyssey struggle to readapt to what their lives were at that time, and to learn to work together toward their common purpose. The show tends to be a hard science fiction, except for the jump back in time, which falls on the really soft end.

The team is led by Commander Chuck Taggart (Peter Weller), a hardened and quick-witted old-school NASA veteran who is often paternal towards them, in part because of his son, Neil, who is also flying missions with him. Neil (Christopher Gorham), having gone from a pot-smoking metalhead to NASA's youngest astronaut, is largely motivated from growing up in his older brother's shadow, and despite having surpassed both him and their parents' expectations, he still occasionally clashes with his father. They are joined by Kurt Mendel (Sebastian Roché), a Nobel Prize winning geneticist, whose extreme cynicism and hedonistic attitude not only serve as counterpoint to Chuck, but very often earns him raised eyebrows and disgusted reactions from even the more liberal members of the crew. Angela Perry (Tamara Marie Watson), the shuttle's co-pilot, is in many ways the son Chuck wished he had. Tough and determined, her striving to earn her own place in the world is very much the result of being the daughter of a US senator. She also had a relationship with Kurt in the past. Sarah Forbes (Leslie Silva), a news anchor and the first journalist in space, serves very much as the team's emotional anchor. Deeply religious and having lost her infant son to cancer years ago, she is then thrust into the brutal position of watching him waste away all over again. Her mellow character and friendly demeanor act as the glue that holds the crew together, and she sometimes fills a maternal role for Neil.

During its runtime the show was plagued by Executive Meddling (like the last 6 episodes being delayed for two years before being aired in the US) and was finally cancelled, despite having one of the highest ratings on its network. Since then, it's attained a fairly strong cult following.