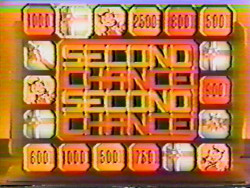 In the first half of each round, Peck read three general-knowledge questions to three contestants. The contestants had five seconds note (which doesn't seem to have been regularly enforced, based on extant footage) to write their answers on cards, which they placed in front of them; following this, Peck gave a hint as to how many were right/wrong (e.g., "At least two of you are right.") and read off three possible answers, one of which was correct. Players got three spins if they stuck with their original answer and was correct, or one spin for choosing the correct answer on the "second chance".

The second half of each round had the players using their spins on the Bonus Board, which had 18 squares containing either cash, a prize (hidden under wrapped-but-generic gift boxes), or a Devil. Stopping the light on a Devil took away all of that player's accumulated money and prizes, with four Devils eliminating that player from the game. The contestant with the highest score after Round 2 won the game.

Chance ran from March 7 to July 15, 1977, replacing The Don Ho Show and itself being replaced by Goodson-Todman's The Better Sex (which itself ended six months later). Six years later, Carruthers reworked the format and CBS bought the result: Press Your Luck.

Today, with very little footage known to exist, Chance is an obscurity to most, including some fans of its revivals. It's not without its fans, however, and if nothing else it shows how a classic format was originally rough around the edges.