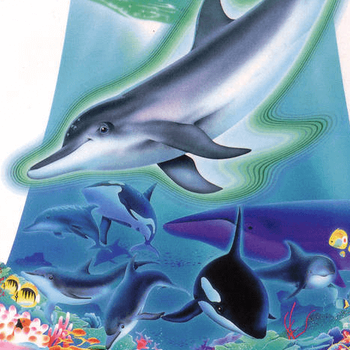 Dolphins are truly majestic creatures. They appear a bit human-like and even save humans in danger. No wonder that the ancient civilizations speculated that dolphins are descendants of the Atlanteans. What's more, they're friendly, cute, and are probably about as close to an alien intelligence as you're likely to meet in this life.
Advertisement:

Given their appealing nature, cetaceans frequently feature in fiction in a number of ways. Listed below are common tropes associated with dolphins and whales. Please list examples on the appropriate trope page, not on this page. Despite the name, Space Whale Aesop does not belong here.