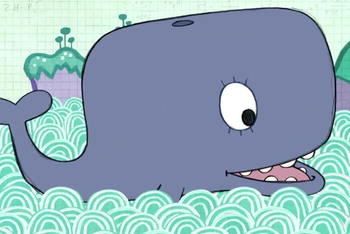 You wouldn't know it from cartoons, but there are various species of whales and not all of them have square heads.
Advertisement:

In cartoons, however, whales are usually drawn as blue/gray square-headed toothy creatures with wide mouths, halfway between a sperm whale and a baleen whale. And, of course, they will have a very noticeable blowhole, more often that not shooting a veritable water fountain from their back. Sperm whales in Real Life have the square heads you often see on cartoon whales, but their eyes aren't so close to their mouth like the baleen whale, and they have narrow jaws with small lower jaws and lack upper teeth.

This is a common way to depict a Monster Whale or Space Whale. For other stock cartoon depictions that combine real things, see Cartoon Cheese and Stock Beehive. Subtrope of Stock Cartoon Animal Depictions.

Some prehistoric whales do vaguely resemble this trope, at least in terms of having a blocky sperm whale-like head with big teeth on both jaws.

Although they are also cetaceans, dolphins, porpoises, belugas, and narwhals are spared of these stock depictions.