Western Animation / Barbie and the Rockers: Out of This World 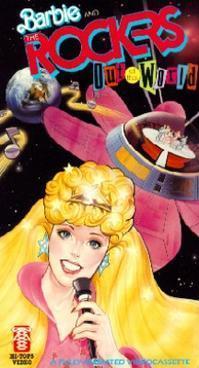 A 1987 cartoon special based on Mattel's Barbie and the Rockers (known as Barbie and the Rock Stars in the UK) line of dolls, developed at least partly in response to the popularity of the Jem cartoon. Unfortunately, where Jem was beloved and ran for three seasons, this barely saw much of a release. It received two direct-to-video specials, but no TV series and hasn't been rereleased since the 1990s.

Barbie and the Rockers are the most popular band in the world, and they have performed everywhere. This of course means Barbie has to take things to the next level: they're performing in outer space!

Alternative Title(s): Barbie And The Sensations Rockin Back To Earth