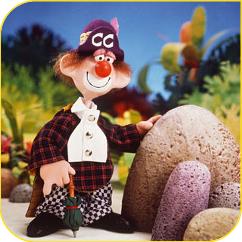 Charlie Chalk (1988-1989) was a short lived British children's television series by the same guys who made Postman Pat and Bertha.

Charlie Chalk is an amicable circus clown who nods off on a fishing trip and ends up marooned on the mysterious island of "Merrytwit". Not to worry though, as the island's inhabitants are a colourful and friendly bunch. It isn't long before Charlie gets settled and starts to learn the ways of the strange and exotic locale, often applying his own circus tricks to get him through the day.