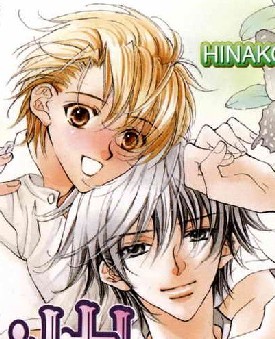 Kojima and Nakahara
Little Butterfly is a three-volume Boys' Love manga by Takanaga Hinako (who is also the author of Challengers, The Tyrant Falls in Love and Awkward Silence) about the relationship between reclusive student Nakahara and the cheerful - almost Keet Kojima. It was serialized from January to February 2004 and compiled into three volumes.
Advertisement:

Kojima sees Nakahara sitting in the rain one night, crying and alone and offers him his umbrella. The two end up in the same class years later and Kojima asks Nakahara to be in his group during a school trip. Nakahara begrudgingly accepts but disappears. Kojima finds him about to get onto a bus and chases him. Nakahara reveals that he has a horrible life at home and wants to cross the sea, like some butterflies he saw on the TV who flew over the sea for miles and flourished in a far-off land. They form a friendship but Nakahara grows attracted to Kojima, who struggles to cope with this.