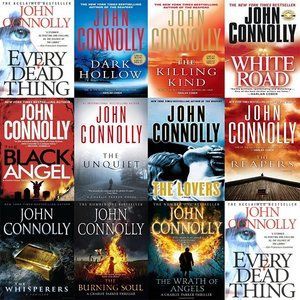 An ongoing series of best-selling supernatural/horror/mystery novels by Irish author John Connolly, following the eponymous detective after the horrific murders of his wife and daughter.

Novels in the series to date:

A novella, "The Reflecting Eye", is printed in Connolly's horror story anthology Nocturnes. It is set between The White Road and The Black Angel, and introduces a character who would go on to become an important part of the Parker mythology.

There is also another novel, Bad Men, set in the same universe that includes a brief cameo by Parker, and some of the survivors from Bad Men go on to become supporting characters in the Parker novels. See the John Connolly page for tropes relating to that book.

In 2019, A Book of Bones incorporates characters and events from Connolly's (initially stand-alone) 2013 novella "The Wanderer in Unknown Realms" into the Parker continuity. Word of God confirms that "The Wanderer in Unknown Realms" takes place in the same continuity as Connolly's other non-Parker novel, The Book of Lost Things... meaning that pretty much everything he's ever written now takes place in one big extended universe.

In 2020, due to the postponement of The Dirty South amid the coronavirus pandemic, Connolly began releasing a new Parker novella in short daily chapters via his website. "The Sisters Strange" was released at a rate of 600-700 words a day, beginning April 2.

The Character Page is under construction.

Nothing to do with the musician Charlie Parker (though Name's the Same gets acknowledged a few times).

He looked like a runway model for a decorator’s convention, assuming that the decorator’s tastes veered towards five-six, semi-retired gay burglars. Now that I thought about it, when I lived in East Village there were any number of decorators whose tastes veered in that direction
Louis: Says the guy with a towel on his dick.
Angel: It's a big towel.
"It's a guy thing. I can do guy things."