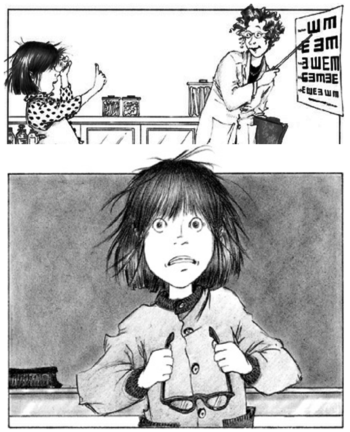 Alice learns that she needs glasses, but when she tries to wear them everyone thinks she looks stupid. So she tries to do without them, but it doesn't go well. Eventually, Alice accepts her need for glasses and people stop making fun of her as they get used to it. Instant plot!

Essentially, she starts needing to wear glasses and is forced to cope with the potentially negative social reaction. The glasses might not actually be Nerd Glasses, but that's what she thinks they are; that's what counts. Sometimes, she ends up discovering contact lenses, allowing for a complete Snap Back to how she was before. Sometimes they'll just Snap Back in the next episode with no explanation at all, which results in a serious Broken Aesop ("it's ok to wear glasses, but makes our actor less marketable").

This has become a Discredited Trope over the past two decades or so. Due to the wide acceptance of glasses to the point that some people are actually buying Purely Aesthetic Glasses just for the look, the stigma associated with glasses is pretty much gone. With the increased recognition of glasses fetishism, you're more likely to see someone use their glasses as a selling point when flirting than take them off.

Contrast Meganekko, where the glasses are part of the appeal, and Purely Aesthetic Glasses, glasses worn specifically to look smart.