Recap / The Simpsons S5 E9 "The Last Temptation of Homer" 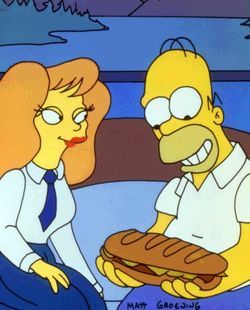 Mindy Simmons, a sexy new employee at the Springfield Nuclear Power Plant proves alarmingly compatible with Homer, who worries that his attraction to her may mean danger for his marriage. Meanwhile, Bart becomes a nerd after being fitted for glasses and prescribed medicated hair salve, orthopedic shoes, and throat spray that makes him sound like Jerry Lewis from the original version of The Nutty Professor.