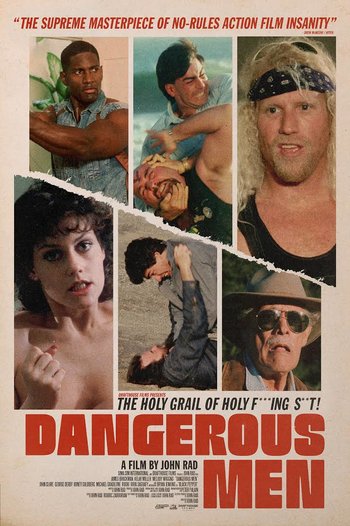 "So... Dangerous Men took 20 years, not to finish, but to stop being made!"
— Jay Bauman, Best of the Worst review

Dangerous Men is an action movie (thereabouts) directed, edited, composed, written and produced by one John S. Rad (Real name Jahangir Salehi Yaganehrad), an Iranian architect-turned-film-producer who fled to America during the revolution.

The film begins with a Rape and Revenge plot: Mina and Daniel, a romantic couple, go to the beach together. After a sudden robbery scene which has nothing to do with this, the couple are confronted by a duo of bikers named Tiger and Leo. Daniel fights them off and kills one of them, but is himself killed, and Mina is nearly raped. Wanting revenge, Mina suddenly "falls" for Tiger and invites him on a date. When they arrive at a hotel room, Mina distracts Tiger by asking him to lick her belly button, and then stabs him to death.

Mina then hitches a ride with a man with a weird accent, who attempts to rape her, only to be threatened with castration. He is ordered to strip down and kicked out of his truck, and parades around a desert nude. It gets weirder from there.

The movie's production began in 1984, but work continued until 2005, when it ran for a week in a few theaters in Los Angeles to very little fanfare. It received a DVD and Blu-Ray combo release in 2015 from Drafthouse Films, where it has since become known as So Bad, It's Good due to the utter quirkiness of the film. It has been featured on RedLetterMedia's Best of the Worst and spotlighted by The Cinema Snob as a Patreon suggestion episode.