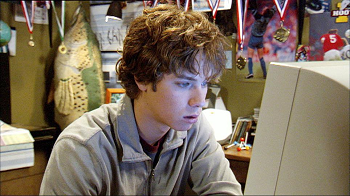 Don't look, Justin! These Are Things Man Was Not Meant to Know!

Cyber Seduction: His Secret Life is a Lifetime Movie of the Week released in 2005.

Justin is a promising high school student and swimmer with a girlfriend, Amy. His life starts to fall apart when he becomes addicted to internet pornography.