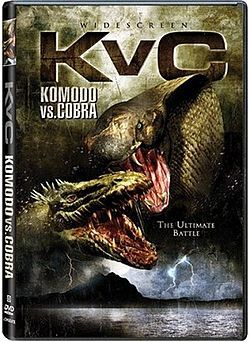 The Ultimate Battle between reptiles!

Komodo vs. Cobra, also referred to as KVC, is a 2005 television film directed by Jim Wynorski. It is Wynorski's sequel to his 2004 film Curse of the Komodo, with several similar elements (experimentation gone awry, father-daughter team, government attempt to bomb things, the ending, Komodo's behaviors, etc.).

The film is notorious for being nearly a Recycled In Space of Curse of the Komodo and has the habit of using Bottomless Magazines and Idiot Ball to the extreme.