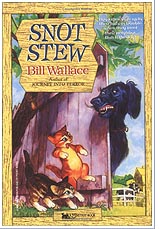 Life can be tough when you're just a kitten. After their mother decides her latest litter is ready to fend for themselves and abandons them in their barnyard nest, Kikki and her brother Toby are discovered and adopted by a human family. But humans are so strange, like that game the smaller ones keep playing...

Penned by Bill Wallace. The story is purely from Kikki's Point of View, exploring everyday life through the eyes of a curious and somewhat timid kitten struggling to comprehend human behavior. Though mostly lighthearted and a bit humorous, there are several darker elements, such as the emphasis placed on how terrifying it is to have an enraged human many times your own size bearing down on you, and the backyard dog, Butch, is portrayed as a shaggy black monster who is almost as alien to the cats as the people are.

The title comes from the 'game' the children keep playing: arguing "Is not!" "Is too!" "Isnot!" "Istoo!" "Snot!" "Stew!" Toby and Kikki eventually try it out; this leads to an obvious moral delivered via Nightmare Fuel.