Literature / The Guardians of Childhood 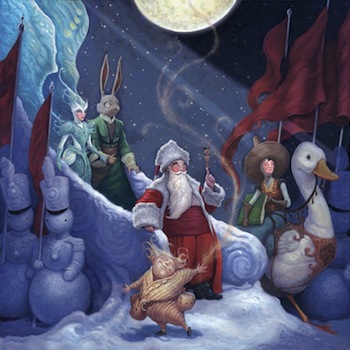 Of course you know the Guardians. You've known them since before you could remember...
"We will watch over the children of Earth,
Guide them safely from the ways of harm,
Keep happy their hearts, brave their souls, and rosy their cheeks.
We will guard with our lives their hopes and dreams,
For they are all that we have, all that we are, and all that we will ever be."
— Oath of the Guardians
Advertisement:

A series of books by William Joyce (writer and production designer behind Meet the Robinsons, Robots and Rolie Polie Olie), The Guardians of Childhood tells a sweeping tale of the ongoing battle between Pitch, lord of nightmares, and the eponymous guardians, consisting of figures such as the Man in the Moon, Nicolas St. North, the Tooth Fairy, Bunnymund the Easter Bunny, the Sandman, Mother Goose, and Jack Frost.

A film by DreamWorks Animation, Rise of the Guardians, was released in November 2012. Taking place many years after the team's formation in the books, it tells the story of Jack's recruitment to the team.

Tropes featured in these works include: