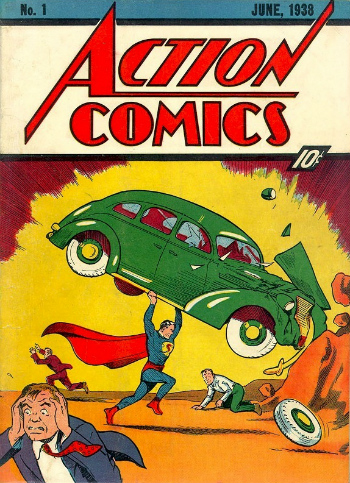 The one that started it all.
Action Comics first saw publication on April 18, 1938, though its first issue was cover dated June 1938. It's most famous for having the debut of Superman in its first issue. What many people do not realize, however, is that Action Comics, like most Comic Books of its day, was an anthology containing multiple unrelated stories. As such, Action Comics #1 also marked the debut of Zatara the magician, perhaps better known today as the father of Zatanna.
Advertisement:

In April 2018, just in time to celebrate its 80th anniversary, Action Comics reached its 1000th issue, officially making it one of the longest-running continual comic series ever published.

For several decades now, Action Comics has held the honor of being the Holy Grail of comic book collecting: an original edition of a number 1 issue in good shape is worth well over a million dollars. Not bad considering that the original cover price in 1938 was ten cents.

If you were looking for the British comic serial named "Action!", see here.

Action Comics story arcs with their own pages include:

Tropes found in other issues of Action Comics include: