Love Can Make You Gonk 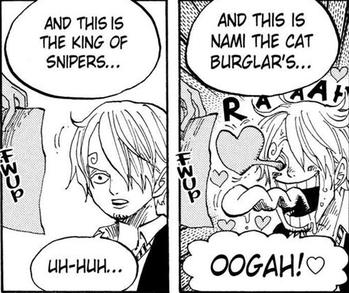 He did it! Bob finally asked Alice, the prettiest girl in school, to the big dance. And she said yes! Just thinking about dancing with her makes his nostrils flare, lips curl, eye lids get puffy and eyes all squinty. While he's a little too happy to notice now, Bob is about to learn one very important lesson in life we all have to learn at one time or another: Love Can Make You Gonk.
Advertisement:

Warning signs of a character about to become Gonk with love include floating hearts, dislocated jaw bone, profuse sweating, panting, noodleing, redness of the face, and the heart attempting to escape their chest at high velocity. If you or a loved one have become gonk with love, do not be alarmed. These symptoms are often momentary and the affected individual will return to their usual artistic style soon. In extreme cases, it has been known to last for a full montage, but will undo itself as the character becomes tired.

Compare Love Makes You Dumb, when the character's brain is the one that starts malfunctioning instead of their body.