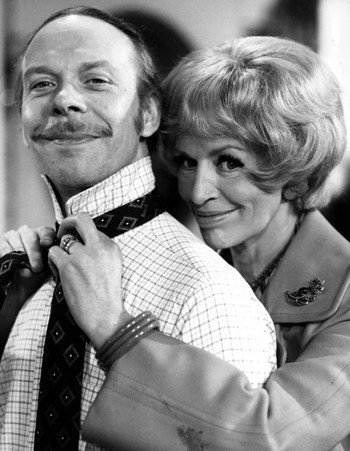 George & Mildred is a British sitcom that aired on ITV from 1976 to 1979. It was a spin-off from Man About the House.

George and Mildred Roper (Brian Murphy and Yootha Joyce) have left their old house after receiving a compulsory purchase order from the Council and move to 46 Peacock Crescent in Hampton Wick. While Mildred enjoys the chance to better herself in her new surroundings, she is always being thwarted—usually by the lazy and generally unemployed George, who has no interest in climbing the social ladder, and continues to show a lack of interest in sexual relations with Mildred.

George and Mildred's yuppie next-door neighbours are Jeffrey Fourmile (Norman Eshley), a snobbish estate agent, and his wife Ann (Sheila Fearn). They have a young son called Tristram (Nicholas Bond-Owen), who gets on well with Mildred and George, and in series 3 a second child called Tarquin (Simon Lloyd) is born. The Conservative-supporting Jeffrey is greatly irritated by socialist George, who frequently annoys him.

Ranked 55 in Britain's Best Sitcom. The Ropers is its Transatlantic Equivalent, much as Three's Company is one to Man About the House itself.

George and Mildred contains examples of: