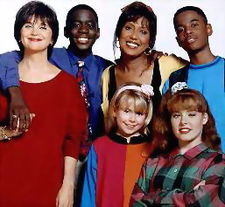 Getting By is an Dom Com that ran from 1993 to 1994, one season on ABC before a Channel Hop to NBC. The show starred Telma Hopkins and Cindy Williams as Dolores Dixon and Cathy Hale, two friends/co-workers splitting mortgage in a new home. Both of the women were single mothers, Dolores had two sons, Marcus (Merlin Santana) and Darren (Deon Richmond) and Cathy had two daughters, Nikki (Nicki Vannice) and Julie (Ashleigh Blair Sterling). Most of the show’s humor was from the two friends' Odd Couple-type relationship as well as their children learning to get along and relate with each other.

The show was a part of ABC's TGIF block for one season. It was originally renewed by ABC, but then it was scheduled for Saturday nights. The creators, William Bickley and Michael Warren were against the move as their previous show Perfect Strangers was moved to Saturdays during it's run and ratings sank. They then pulled the show from ABC and moved it to NBC. Unfortunately for the show, it's lead-in Saved by the Bell: The College Years ended up being a ratings dud, which in turn, led to weak ratings for Getting By and NBC moved the series to Saturdays anyway. The show was soon cancelled afterwards.