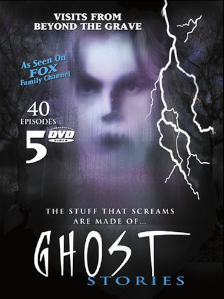 The stuff that screams are made of...
Come with me to a place of wondrous contradictions. A place that is silent and unstirring, yet restless and alive. A place of untold peace and boundless dread. Come with me into the very cradle of darkness, where those who dwell, dwell alone!
— Rip Torn, narrator of series.
Advertisement:

Ghost Stories is an American horror anthology television series that ran from 1997 to 1998 on the cable channel The Family Channel (now Freeform). The show was narrated by the late Rip Torn, and originally two episodes were presented back to back in an hour-long segment. Each episode featuring a Twilight Zone-esque shocking plot twist. Once complete, it goes directly into the episode where Rip Torn introduces the episode. During the episode's conclusion, Rip Torn comments on what was seen (usually in some form of a moral).