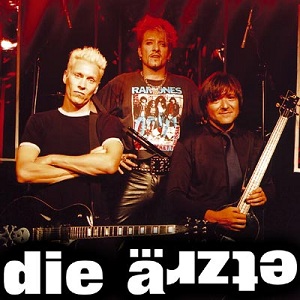 Die Ärzte (lit. The Doctorsnote As in medical doctor/physician.) are a punk rock/pop-punk band from Berlin, Germany. Along with "Die Toten Hosen" (lit. "The Dead Pants") they are the most successful German punk act. In The '90s they made a music video starring Lara Croft. They modestly refer to themselves as die bäste Band der Welt; "the bäst band in the world."

For most of their career they have consisted of:

Formed in 1982, they broke up briefly in 1989, reuniting in 1993. They have released 15 studio albums, six live albums and seven compilations until now, and managing to get three of all of them indexed

in Germany. Farin and Bela are for all intents and purposes the face of the band but their current bass player (the third in band history and with them since 1993) also sings a handful of songs and has written a couple, usually one or two per LP. The two former bass players have been even more marginal to the band with their second bass player never even officially being part of the band (Their second bass player was featured in the manner of "Die Ärzter with..." or similar ways). Bela and Farin are both from Berlin whereas Rod was born in Chile and came to Germany because his parents ran afoul of the Augusto Pinochet regime. Die ärzte are famous/notorious for their elaborate three hour live shows that include antics like giving encores at festivals and spending most of the time bickering at each other in puerile humor and heavy Berliner dialect. There is even one semi-official release of just the things they said on live concerts that weren't their songs. Improvising changed lyrics to their songs is also a thing they like to do.Their (studio) discography:

Die Ärzte and their songs provide examples of: