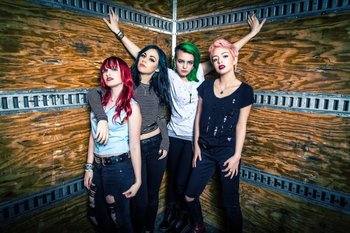 Doll Skin is a rock band from Phoenix, Arizona. They originally formed in 2013 in order to compete in a Battle of the Bands at a local high school. As it happened, David Ellefson, bassist of Megadeth, was one of the judges; when Doll Skin won first place, Ellefson offered to act as their manager and producer. Since then, they have released an EP, 2015's In Your Face, and two albums, 2016's In Your Face (Again) and 2017's Manic Pixie Dream Girl, and toured with bands such as Dead Kennedys, Social Distortion, and Otep.

On April 23, 2019, the band announced that their third album, Love Is Dead and We Killed Her, would be released on June 28, 2019. Additionally, they released the first single off the album, "Mark My Words"