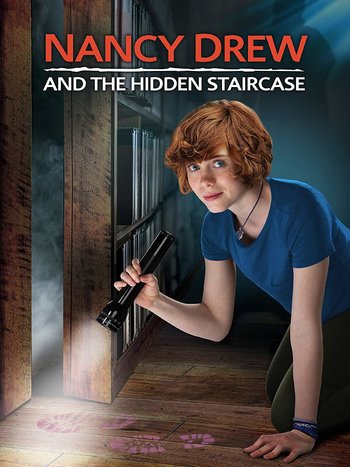 Nancy Drew and the Hidden Staircase is a 2019 American teen mystery/comedy film directed by Katt Shea (Poison Ivy and The Rage: Carrie 2) and written by Nina Fiore and John Herrera. It is based on the book of the same name from the Nancy Drew franchise by Carolyn Keene. It was earlier adapted on film in 1939. It stars Sophia Lillis (of It fame), Zoe Renee, Mackenzie Graham, Laura Slade Wiggins and Sam Trammell.

Nancy Drew (Lillis) is a bit of an outsider and struggles to fit into her new surroundings. She and her pals set out to solve a mystery, make new friends, and establish their place in the community.

The film had a limited theatrical release and went Direct to Video. It is not connected to the Nancy Drew series that also premiered in 2019.

Nancy Drew and the Hidden Staircase contains the following tropes: