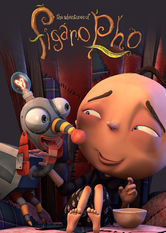 From left to right: Rivet and Figaro.
Advertisement:

The Adventures of Figaro Pho is an Australian CGI animated series created by Luke Jurevicius, who also voiced the titular character and composed much of the show's soundtrack.

The show stars a shy boy named Figaro Pho, who lives in a gothic mansion with his robot dog, Rivet. Figaro suffers from all sorts of different phobias. Every episode is centered on, and named after, a specific phobia, which Figaro conquers in that episode. While most shows would do this by showing that Figaro's phobias aren't things to be afraid of, this show does the opposite: It manifests the various phobias as threatening villains, which Figaro and Rivet then defeat.

The show is unique in that there is no dialogue. Instead, the characters make sounds such as groaning, laughing, screaming, etc. and the stories are told visually.

The Adventures of Figaro Pho contains examples of: