Western Animation / Quasi at the Quackadero 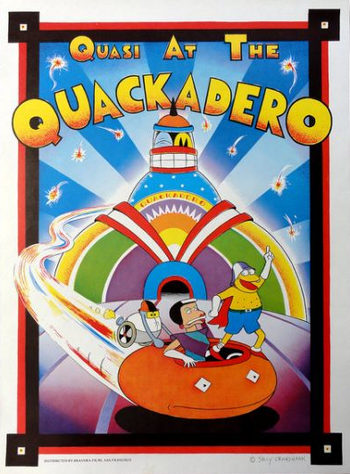 Quasi at the Quackadero is a 1975 animated cartoon by Sally Cruikshank.

The short revolves around a pair of "ducks" named Quasi and Anita (the latter played by Cruikshank herself), and their pet robot Rollo as they visit the Quackadero, a strange place where the amusements revolve around time travel. Among the mad things that happen are an apparently fabricated "shining moment", five actors faking being past lives of Quasi, and the trio having their thoughts painted.

Yeah, it's that kind of cartoon.

There is also a sequel called Make Me Psychic

, where Anita buys a device that can make matter obey her will. It's just as deranged.

Sally Cruikshank has uploaded the whole thing to YouTube, so you can catch the madness here

Tropes found in this short: