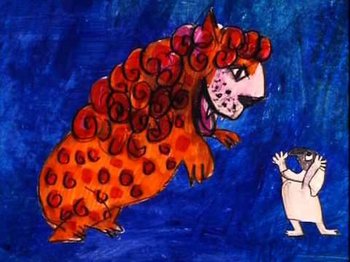 Pulcinella is an animated short film (10 minutes) from Italy, directed by Emanuele Luzzati.

The character is based on Pulcinella from Italian Commedia dell'Arte (the same character who in England evolved into Punch). In the short Punch is apparently trying to sleep late, but his shrewish wife screams at him and whacks him with a broom until he finally gets out of bed. He finally goes out, and ambles around for a little bit until he stops at a marble column, seemingly some sort of monument. He looks like he's about to take a whizz on it until a half-dozen cops appear out of nowhere and chase after him. He outruns the cops, makes it back home, evades his wife and climbs to the roof of their little house to take a nap—and he has a strange and fantastical dream.

All of that is set to the music of Il Turco in Italia by Gioachino Rossini. Compare The Thieving Magpie, another Luzzati short that had a similar style and was also accompanied by Rossini music.