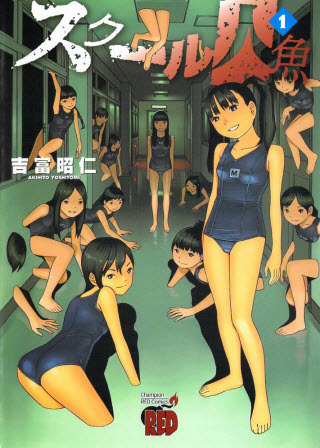 The things we do for love...
Advertisement:

A horror manga / anthology series by Akihito Yoshitomi (author of Blue Drop and Eat-Man) about Japanese school girls who really want boyfriends. But rather than going through the trouble of getting the attention of a boy, talking to them and just being themselves, they decide on a much quicker way to do so... By hunting mermaids in their school and eating their flesh.

No, really. That's the premise.

Around a few Japanese high schools, an old worn out notebook is passed around detailing a certain spell that, when chanted at a certain time at night, will cause human looking mermaids to appear before the user. These mermaids wear Japanese style swimsuits with a letter on their chest. If the mermaid with the first letter of the name of the boy you love is caught and killed, all you have to do is eat the flesh of it while thinking of your true love and, presto, instant boyfriend. However the mermaids won't be caught so easily since they can swim through the walls and floors like water and are extremely fast to boot.

This doesn't deter the girls who find this notebook and indeed give it a shot. The thing is though some are quite, er, competitive in trying to get what they want. And then of course there's the much deeper dark secret of the mermaids themselves.

Originally published as a three-chapter one shot story, it was given a short serialization run that managed to produce two volumes of material. That was thought to be the end of it. But in 2016, the series was granted a second serialization run, under the title School Mermaid 2 continuing the story with more added twists to the mermaids. Unlike the first series though, the second has a more central protagonist and connected storyline.

Fair warning - this manga is pretty disturbing so view at your own risk.

Unmarked spoilers in the folder.