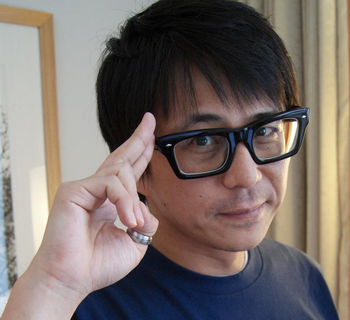 Hidetaka Suehiro (born 14 April 1973), also known as SWERY or Swery65, is a Japanese video game writer and director. He was one of the founding members of Access Games, which he later left due to tension with his superiors, forming a new studio called White Owls Inc.
Advertisement:

Despite being a Japanese creator, SWERY is notable for targeting a western audience with all of the games he directs; in fact, his games have an English script and voice acting even in their Japanese releases. His games always have a narrative focus, frequently with offbeat humor, strange twists and characters talking about movies. Naturally, his games tend to become Cult Classics.

Compare and contrast with Suda51. The similar nicknames are a coincidence, as far as anyone knows.note Yahtzee Croshaw claims they both based their names on their license plate number, though the "51" of the namesake is Suda51's real first name Goichi written as number.