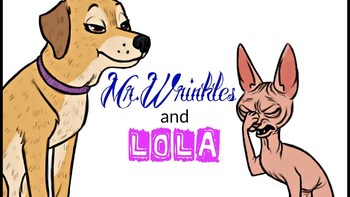 Lola and Mr. Wrinkles is a 2018 webcomic by Ben Hed. A pair of pet "siblings", Lola, a mischievous Labrador, and a sarcastic Sphynx cat, Mr. Wrinkles, share a suburban home. But the path of siblinghood never did run smooth...

The individual cartoons can be found at the artist's Instagram here.

For another work by the same artist in the same universe, see Pixie and Brutus.