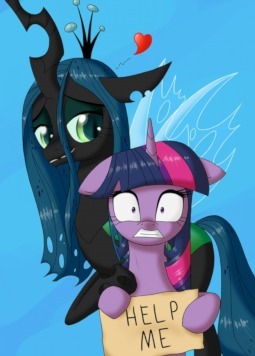 The happy couple, after their long and romantic courtship.
Advertisement:

Ponies call what happens when two people attack each other, thwart each others' plans, and generally do their best to make the other's life miserable 'bitter enmity'. Changelings, on the other hand, call it 'dating'.

One Twilight Sparkle is surprised to discover that her uncovering Chrysalis's plan in Canterlot was, to Chrysalis, a proposal to a relationship. And their bitter rivalry afterwards was highly romantic. Oh, and that last letter she received from Chrysalis was a proposal to marriage. Which she accepted. So now she's married to Chrysalis.

, and has a sequel: Pony Courtship Rituals