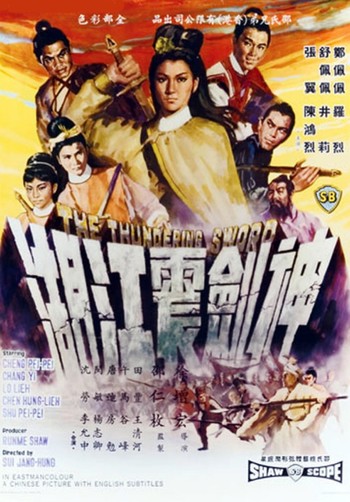 "The Thundering Sword can shatter world's other two precious swords. When the sword appears it could cause great disasters which would cease only when the earth cracks."

The Thundering Sword is a 1967 Shaw Brothers wuxia film starring Cheng Pei-Pei, Chang Yi (in his debut as leading role) and Lo Lieh.

The Thundering Sword, a powerful, indestructible weapon hidden under a booby-trapped mausoleum, and clans all over the martial arts world are eager to kill each other for posession of the weapon. Two martial arts students, Yu Chien-Wan (Chang Yi) and Chiang Kwun-Yuan (Lo Lieh) are sent by their master, Chief Instructor and High Priest of the Yuan Mountain Clan, to seek this dangerous weapon so that it may be destroyed to restore peace to the clans, but then Yu Chien-wan had a run-in with the deadly swordswoman Shu Chiao-chiao (Cheng) who is also looking for the sword.

The Thundering Sword Include Examples of: