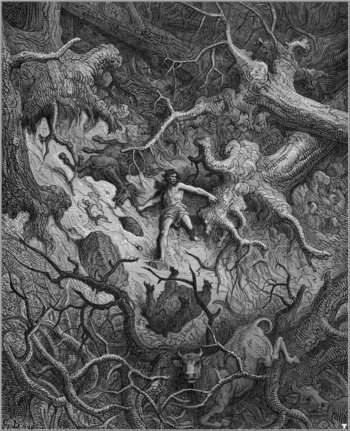 A massive chivalric epic poem in 46 cantos by Ludovico Ariosto, first published in 1516 and revised and expanded a couple of times, with its final form appearing in 1532. Orlando Furioso ("Mad Orlando" or "The Fury of Orlando") continues and completes the story begun in the unfinished but equally epic poem, Orlando Innamorato ("Orlando In Love") by Matteo Maria Boiardo, Conte di Scandiano (1441-1494). Charlemagne (Carlo) is at war with the Saracens, and his paladin Orlando (Roland), the world's greatest knight (and hero of the French Chanson de Roland), goes mad from Unrequited Love for the pagan princess Angelica of Cathay. Has a Beta Couple, which also consists of a pagan and a Christian: Ruggiero (Roger) of Risa and Bradamante, the mythical ancestors of Boiardo's and Ariosto's employers, the Este family, ducal house of Ferrara.

The poem is not so much a Chivalric Romance as a Deconstruction of same, casting an ironic eye on all the tropes and conventions of the genre, with Orlando's devotional love turning to madness being only the most obvious treatment. But Ariosto is more interested in entertaining than anything else, and succeeds at his task at great length. It was enormously influential in the centuries after it was written, influencing Tasso, Spencer, and Milton to name the most famous. Gustave Doré illustrated the poem in a memorable style.