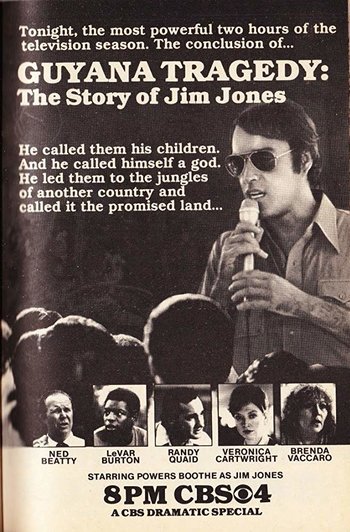 Guyana Tragedy: The Story of Jim Jones is a 1980 Made-for-TV Movie centered on Jim Jones from his childhood up to his death following his leadership of Peoples Temple. Unlike the later documentaries Jonestown and Jonestown: Paradise Lost, it's more of a fictionalized take on events (although it does contain many of the most important parts of the story) with some characters who are equivalents to (or composites of) actual people involved with the Temple. The film stars Powers Boothe as Jim Jones, with Ned Beatty as Congressman Leo Ryan.

Originally distributed by Telepictures for CBS where it was aired on April 15 and 16, 1980 in two parts, the movie has since largely faded into obscurity with few re-airings and video releases after the fact.

Guyana Tragedy: The Story of Jim Jones contains examples of: